The village of Monthélie is located seven kilometers southwest of Beaune and currently has 194 inhabitants. Its 314 hectare territory is located in the heart of the Côte de Beaune, between the municipalities of Volnay, Meursault and Auxey-Duresses.

Courtépée evokes the opinion of a writer claiming that Mount Olye expresses in the Celtic language the meaning of "height on the way". This etymology has one merit, that of plausibility. The fact that it fits perfectly with the topography of the place, Monthélie being located on the hillside of a hill facing south-west. The village is very old, we discovered a Gallic cemetery there at a place called "Les Cras". Our village and its vineyard were for five centuries, from the 10th to the 15th, under the dependence of the Abbey of Cluny, following the donation made in 1078 by the Duke of Burgundy Hugues I. Since November 21, 2007, Monthélie has been part of the large European network of Cluniac sites.

Monthélie is one of the most picturesque wine-producing towns in Burgundy, with its narrow sloping streets and houses of venerable age, alongside modern winegrowers' residences. The village appears as a living gallery of ancient and modern Burgundy with the castle and its characteristic polychrome-tiled tower at its center, as well as the church and its steeple in the same tiles. The latter, in Romanesque style, built at the end of the 12th century, is classified as a Cluniac site. It was enlarged and remodeled in the 14th century. Its lava roof was redone; it is particularly successful, the work of "contemporary washers" deserves to be noted and encouraged.

The red wines of Monthélie are well colored. They develop powerful aromas inspired by red and black berries (cherry, blueberry, blackcurrant), undergrowth moss, oak.
Their flavors reveal a rather lively astringency and a mellowness which gives them an elegant charm.
The premiers crus are full-bodied and structured thanks to an even more present tannin and endowed with a pronounced bouquet.
The white, golden wines, with nuances of green when they are young, are very similar to their neighbors from Meursault: fresh almond on the nose, great mellowness on the palate, enhanced by the necessary acidity that characterizes great wines.
Monthélie reds are robust enough to last a long time. They can easily be kept for at least ten years in normal years and for up to 25-30 years when the harvests are renowned, concentrated or tannic, generally in warm years and especially in the premier cru. White wines should be consumed between 3 and 8 years old, informed amateurs knowing how to expect them even longer when the conditions for a great year are met.

The vineyard and its wines

The Monthélie vineyard covers around 158 hectares, broken down into:

The Duresses: located on the Auxey-Duresses side.

The Monthélie reds are all made from Pinot Noir while the whites are produced by Chardonnay.

As in all the villages on the coast, geologically we find very different soils depending on the climate. On the Volnay side, there are limestone Bathonian soils with red soils for the premier crus and marl on the summits. On the Auxey-Duresses side and in the Danay valley, there are limestone soils in places and little limestone Aargau marls. At the bottom of the Valley, we find ancient alluvium. 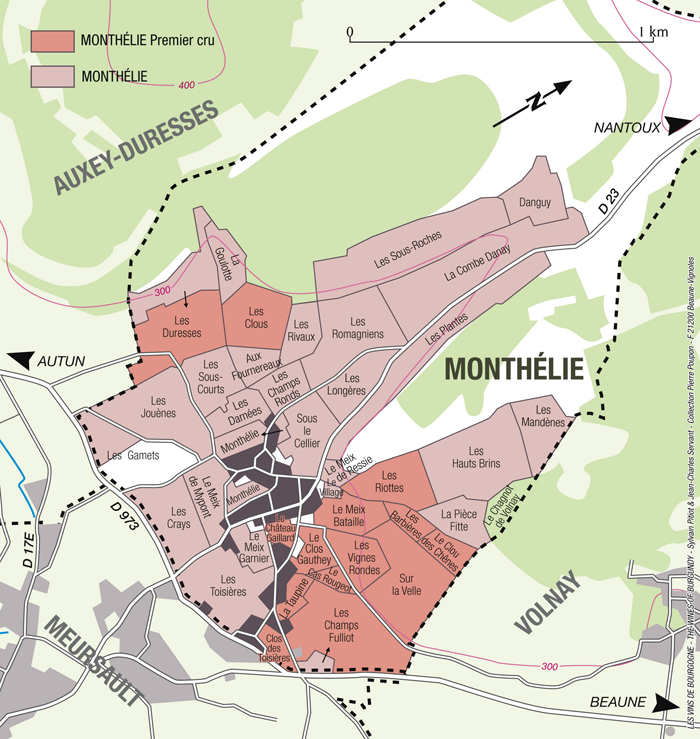 It should be noted that Monthélie has practically no plain, the entire vineyard is practically on a hillside. Many authors have pointed out that in Monthélie, there was only vine. The absence of arable land in the plains gave birth to a well-known saying of the Côte de Beaune saying "that a hen dies of hunger in Monthélie at harvest time", hence the recent undertaking to make the agreements with Bresse poultry if the Monthéliens don't want to starve.